Mamman Daura is today described as the “most powerful nephew” in Nigeria by virtue of his closeness to President Muhammadu Buhari.

At the centre of the recent complaints by Aisha, Buhari’s wife, is that those who did not participate in the campaign were the ones calling the shots in her husband’s government

TheCable understands that Duara is one of those she was referring to, having already complained privately about him.

However, what has often not been reported is how Daura came to wield so much influence on Buhari.

He is the son of Buhari’s elder brother, but since Daura is three years older, the president is “awkwardly” his uncle.

Daura, often described by associates as “extremely intelligent and brilliant”, was a journalist and an industrialist, serving as head of the African International Bank and also chairman of the board of the Nigerian Television Authority (NTA).

In the book, Muhammadu Buhari: The Challenges of Leadership in Nigeria, John Paden, an American professor, offers a historical insight into the significant role Daura played in the formative years of his “uncle”.

According to Paden, it was Daura, along with Waziri al-Hassan (Buhari’s foster father), that encouraged Buhari, a reluctant student in his early years, “to settle down and take his studies seriously”.

It was also Daura that “strongly encouraged” Buhari to join the military in 1961.

Daura, Paden wrote, would become a “life-long inspiration and confidant to Buhari” who guided him all through his formative years.

Buhari would go on to become military head of state in the final years of his career.

So while Aisha might have been married to Buhari for 27 years, Daura had known her husband for 73 years.

Paden revealed that “after the death of his mother in December 1988, Buhari was released and traveled to Daura for the mourning. When he arrived in Daura, he found his farm much as he had left it. His senior brother (the father of Mamman Daura), along with the Barden Daura, had managed the cattle, sheep, and horses in his absence”. 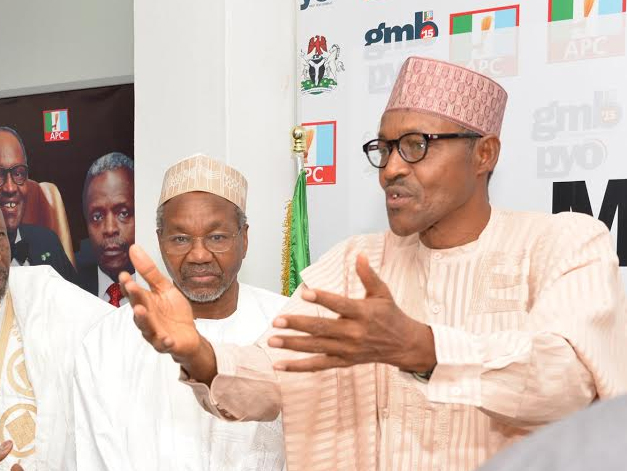 Daura (left) with Buhari during the 2015 presidential campaign

The George Mason University professor wrote: “When Buhari’s father died, Waziri al-Hasan – the son of Emir Musa ­ became the guardian of Zulaihat (Buhari’s mother) and her six children, including her youngest,  Muhammadu. This played a major  role in the upbringing of Buhari.

“This extensive kinship network also affected the future of Buhari in another important way. His senior brother was the father of Mamman Daura, who was three years older than Buhari, although technically his nephew. Mamman would become a life-long inspiration and confidant to Buhari. He was especially critical in encouraging Buhari to pursue lifelong education.

“Like many boys at that time and place, Buhari went to Quranic school before going to primary school. He was not enthusiastic about these studies. Early each morning, he would get up and have to fetch firewood for his teacher for the evening Qur’anic readings. There were also several hours of Qur’anic lessons in the morning, at a time when Buhari would rather be outside playing.

“In part because of his love of the outdoors, Buhari was a reluctant student in his early years. He would often skip school altogether, although this always resulted in beatings with a cane by the schoolmaster. Only with the encouragement of Waziri al-Hasan and Mamman Daura did he eventually settle down and take his studies  seriously.”

Young northern boys were being encouraged to join the army in the years around Nigeria’s independence, and Buhari was encouraged by his uncle to consider a military carrier.

“Meanwhile, the Emir of Katsina, whose emirate adjoined Daura  Emirate, was encouraging bright  young men to go into the military and train to become officers.  His own son, Hassan Katsina, had  become a military officer,” Paden wrote.

“When Buhari was considering his options in 1960, Hassan Katsina would often take the secondary school boys out for night hikes and to sleep under the stars. Buhari enjoyed the great sense of adventure of these nighttime ventures into nature.

“Buhari, who was now nineteen years old, had to take several exams even to be considered for officer training. He was able to pass English, mathematics, and general knowledge, plus he met the physical requirements. Still, the competition was nationwide, and only about seventy boys would be selected for officer candidate school. Of these, only half would be commissioned.

“The competition was thus stiff, but Buhari was among those selected. One of the key qualities needed in the military was “leadership.” Buhari would prove himself time and again to possess that rare gift.