PROPERTIES FOR SALE IN ABUJA

VISIT MAIDABINO INVESTIMENT FOR ALL YOUR TASTY NEEDS

BUY ALL KINDS OF PLOTS/HOUSES/RENTS IN KATSINA

Banditry: Police arrest foreigner, 4 others operating in Katsina, others

The Police in Katsina state yesterday paraded two suspected motorcycle robbers, Umar Sada alias ‘Yaume’ and Ahmed Adamu alias ‘Dindingi’ both of Kofar Sauri area of Katsina metropolis for killing three persons and stealing their motorcycles which they sold off to a buyer from Niger republic for N9000.
The duo who were apprehended by the state Commissioner of Police’s surveillance Corp, said they were offered N3,000 for any motorcycle they steal and that in the three occasions they have stolen motorcycles, they killed the owners, took the motorcycles and sold it to their buyer who rewarded them with N3,000 cash for each operation. 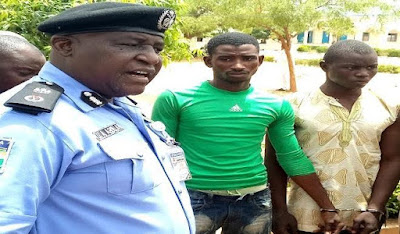 Speaking at the police state command, one of the robbers, Ahmed said: “After every operation we take the motorcycle to Hirji town to meet one Mikailu Rahamawa who cross over to Niger Republic to return with our payments. At most we are paid between N3,000 to N4,000 depending on what he tells us, we collect and return to continue. So far we have operated and killed three persons at the G.R.A., Lambum Danlwai and Steel Rolling areas.”
On his part, the second robber, Umar Sada said: “All I want is for the police to go after others involved as well as I regret my actions. We normally used cables to strangled our victims, they become unconscious and dead before we take the bike”.
After the parade, the state, Commissioner of Police Usman Abdullahi warned residents of the state from plying lonely roots where such robbers operate most of the time.

“People should be careful on carrying commuters to lone areas, they sell this machines between N15,000 to N40,000. They have owned up to their acts as from what you can see, we will soon charge them to court”